Link to this site and other people in Leytonstone on the social media sites below. Many shops and businesses in Leytonstone still don’t have websites nor seem to be using any social media, so let’s encourage them to get online (and stay in business — after all most social media are free!).

This is the part of Facebook used by individuals which most people are familiar with. Please add yourself as a friend.

Facebook pages have been introduced more recently and are for businesses and community groups. You don’t have ‘friend’s on a Facebook page, instead you ‘Like’ the page. Don’t forget to ‘Like’ the Leytonstone page! With Facebook pages you also get statistics about how many people have visited the site (but you don’t know who, the statistics are anonymous). Facebook pages also have facilities for advertising.

Introduced in late 2011, Google+ is Google’s answer to Facebook. It’s not yet as popular as Facebook but is growing fast. Google+ integrates well with all the other free Google facilities like Calendars, Docs, Gmail and so on. 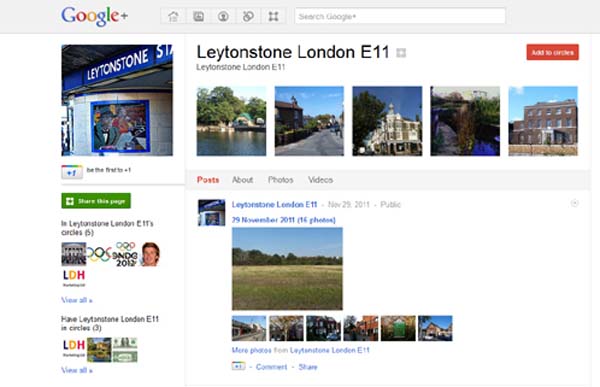 Great for short, quick messages, 140 characters maximum. There’s a Twitter feed on the right hand column of this site. I use Twitter sparingly, so if you sign up you won’t get bombarded with the sort of: “Thinking of making a coffee”, “Making a coffee”, “Forgot to drink my coffee as too busy on Twitter” type of messages.

Since 2011 Pinterest has been taking the social media scene by storm, particularly in the USA but increasingly in the UK. It’s an electronic noticeboard we you can quickly drag content and share it with others. Leytonstone has had a presence since 10 May 2012. It’s used for a wide range of things, from individuals sharing recipes to shop posting pictures of their new stock. Totally free.